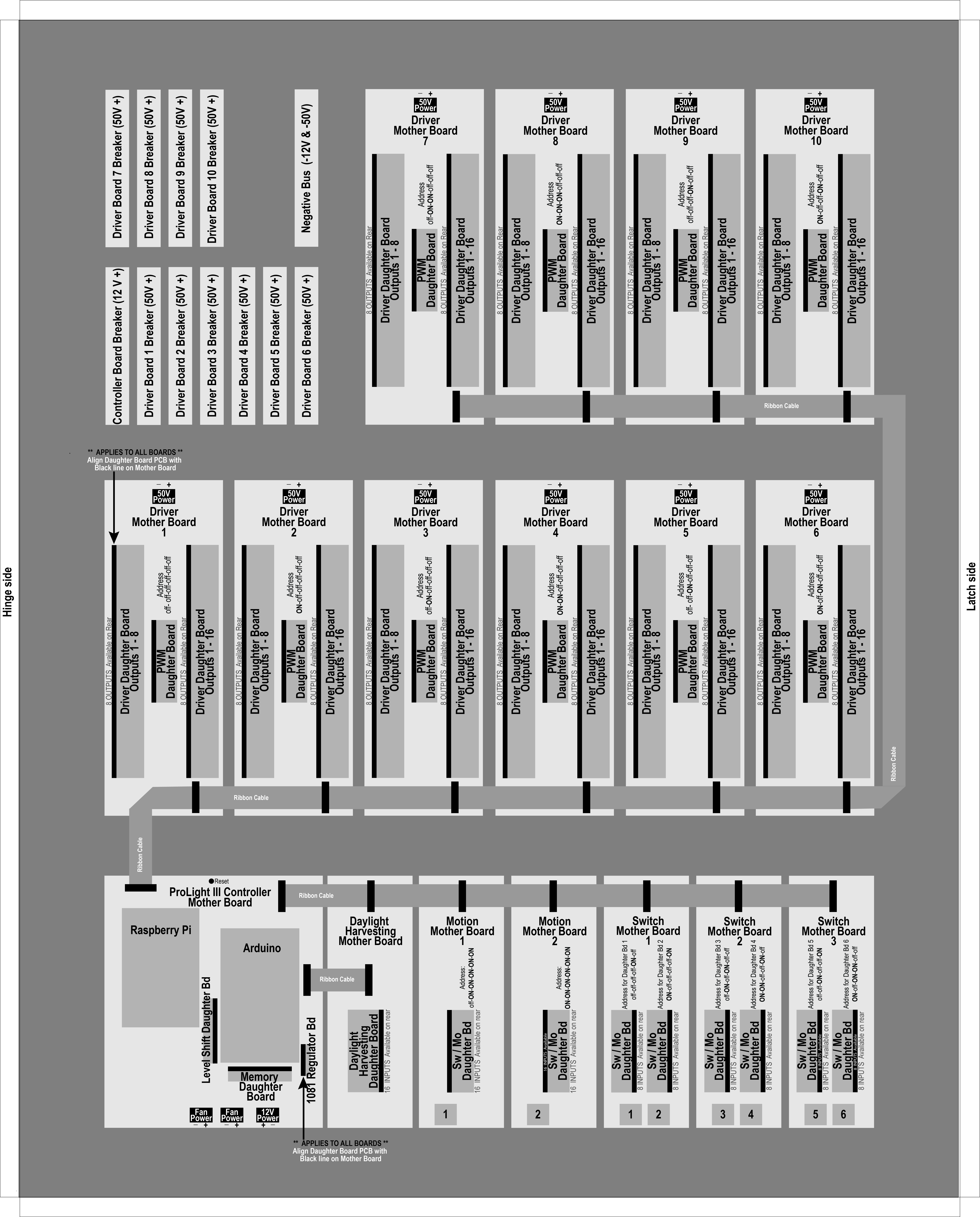 Max 1 per ProLight III • located in The Control Center

The Arduino Mega Controller, is the “brains” of the system and provides real-time monitoring of switches, motion sensors, timed events, and subsequent control of the lighting system. The Controller is completely dedicated to real-time functions in order to ensure high reliability, responsive, and smooth (no flicker) lighting-control performance.

The Arduino Mega is single-board controller available from Arduino and many third-party suppliers. Millions are in service in professional and do-it-yourself applications across the globe. The Arduino is a premier platform, used in electronics and computer engineering education programs worldwide. Click here for more information on the Arduino Mega.

The Raspberry Pi is an open-source computing platform available from multiple vendors and broadly used worldwide by product manufacturers, educators, and do-it-yourselfers. Click here for more information on the Raspberry Pi.

Max 10 per ProLight III • located in The Control Center

Each Driver Board can accommodate up to 16 LED light strings or “channels”, each comprised of up to 8 – 6 watt fixtures connected in a daisy chain manner using 18 awg, 2 conductor zip chord.

PWM control is regulated between zero and 100 percent. This results in constant current output from zero to the driver’s rated current. In this example, 1 Amp (1000ma) drivers are used. In the event that the physical area illuminated by the channel is too bright, it’s possible to lower the maximum intensity by swapping out the driver module for 300, 500, 700, and 1000ma drivers. It is also possible to set the max light percentage output by specifying it in the configuration software under the channel tab without changing out the drivers.

Components that make up the ProLight III Driver Board are: a Driver Mother Board, a PWM Daughter Board, and two Driver Daughter Boards. Daughter boards are plug-in replaceable on the mother board.

Max 3 per ProLight III • located in The Control Center

Switch Reader Boards accommodate up to sixteen switch cables each which are comprised of up to seven individual buttons/functions. Switches connect in a daisy chain manner using Cat5/6 cable.

Components that make up the ProLight III Switch Board are: a Switch Mother Board, and two Switch/Motion Daughter Boards. Daughter boards are plug-in replaceable on the mother board.

(optional) Max 2 per ProLight III • located in The Control Center

Components that make up the ProLight III Motion Board are: a Motion Mother Board, and one Switch/Motion Daughter Board. Daughter board is plug-in replaceable on the mother board.

(optional) Max 1 per ProLight III • located in The Control Center

Hinging on the left, allows ease to the rear for wiring of all fixtures, switches, motion and daylight harvesting sensors. This enclosure allows the system to expand with ease. A system might start with only one driver board, one switch board and one motion, but then need to add more lights, switches or motions. New boards can be added easily as the need arises. With all wiring to components on the rear, there is full accessibility for adding boards or checking diagnostics on the front.

Max 1 per ProLight III • located near The Control Center

Power supplies are housed in the enclosure and connected to the system by the end user. The configuration of power needed is based on the number of driver boards in the system.

For those desiring the expandable ProLight III, but that know they won’t need to expand past four driver boards, we provide this smaller enclosure which holds all Controller, DayLight Harvesting, Switch & Motion boards, but only FOUR Driver Boards.

As with the larger enclosure, this also wires fixtures, switches, motion and daylight harvesting sensors from the back, allowing easy access to boards and diagnostics on the front.